Values: The Key to Relevancy in the 2016 Presidential Contest 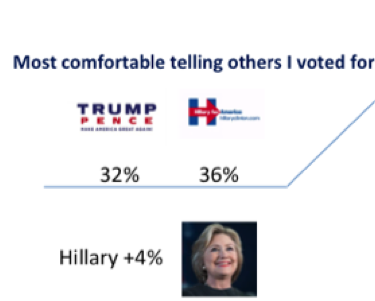 At Brodeur Partners, we have used our relevance model to both diagnose and design effective brand and marketing campaign. It is a model we are continually tweaking, refining and updating. As part of that process we applied our methodology to the most pressing (and arguably most relevant) campaign today – the battle between Donald Trump and Hillary Clinton for the President of the United States.

Consistent with other analysis, the critical pivot point for this presidential race will be the battle for the moral dimension of American voters – specifically which candidate can convince voters he or she is closest to their beliefs, ethics and values.

The current Brodeur relevance model is built around four concepts:

So we asked people to evaluate the candidates in each of these four areas.

Thinking – Advantage Clinton. We asked people to pick the candidate they felt was the “most rational and logical choice.” On this measure the former Secretary of State held a significant 9-point lead with 40% selecting Clinton and just 31% selecting Trump. Even a plurality of men – a core Trump constituency – give the nod on this front to Clinton (40% Clinton, 35% Trump). This “rational and logical” gap balloons to a 12 point spread among women and a 15 point spread among those 18-34 (38% Clinton, 23% Trump). Moreover, Clinton beats Trump on this measure 2-to-1 when it comes to ideological moderates with 45% of that group selecting Clinton and 23% saying Trump.

Sensory – Advantage Trump. We asked people to pick the candidate they felt was the “most interesting and exciting.” Here, Trump, the business man and market held a clear advantage over Clinton with 35% selecting Trump and only 29% selecting Clinton. This is at the core of Trump’s strength. Trump had a significant advantage among his core constituencies. He held a 17-point edge among whites (40% Trump, 23% Clinton), a 14 point edge among those over 65 (40% Trump, 26% Clinton), and 13 point edge among men (41% Trump, 28% Clinton). Even among Clinton’s core constituencies of Millennial and women she only managed a tie

Community – Slight advantage, Clinton. We asked people to select the candidate they would be “most comfortable telling other people I voted for.” Here, Clinton had a slim 4-point lead with 36% selecting Clinton and 32% selecting Trump. As in the three other dimensions, Clinton has significant majorities among women (37% Clinton, 28% Trump), Millennials (36% Clinton, 23% Trump). However Trump led in social acceptance among whites (36% Trump, 30% Clinton), men (36% Trump, 35% Clinton), those over 65 (40% Trump, 33% Clinton) and those making over $100k (34% Trump, 28% Clinton)

We tend to discount this seeming advantage in light of what has become to be known as the “Bradley effect.” Back in 1982, African American mayor Tom Bradley led in the polls going into the California gubernatorial race. He lost. Pollsters have seen similar phenomenon with other African American political candidates such as Doug Wilder and David Dinkins. According to some, the “Bradley effect” could come into play in this election with voters telling pollsters what they think pollsters want to hear – that they won’t vote for Trump.

This may well explain why the battle is dominated by claims and counter-claims over personal emails, tax returns and how is the biggest champion for women.

It is a contest over which candidate can make the case that they understand and can champion those things most important to voter’s principles, ethics and moral standards.