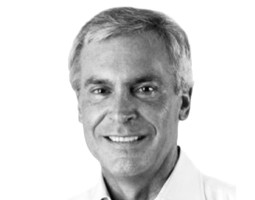 John Brodeur is chairman of Brodeur Partners. John founded Brodeur Partners in 1985 and built it into an award-winning global organization with offices and affiliates in the U.S., Asia, Europe and Latin America.

The company was acquired in 1993 by Omnicom Group, Inc., (NYSE: OMC), the world’s largest communications and marketing holding company.

Named the Outstanding Journalism Graduate of the University of Nevada and later Alumnus of the Year, his career began at the Nevada School of Medical Sciences where he was the first Public Affairs Officer. John reported for United Press International and was a writer for the Reno Gazette-Journal during college years. He worked as a press secretary to Senator Howard Cannon, D-NV, and as chief of staff for Rep. Jim Santini, D-NV, in Washington D.C. for seven years.

John earned a master’s degree from Harvard’s Kennedy School and is trustee and advisor for several nonprofit and corporate boards. He is a member of the Advisory Board for the Tufts University School of Medicine, and has served on the Boards of Xaverian Brothers High School (as chair) in Westwood, MA and Cristo Rey High School in Dorchester, MA.