Relevance and the Infrastructure Mess 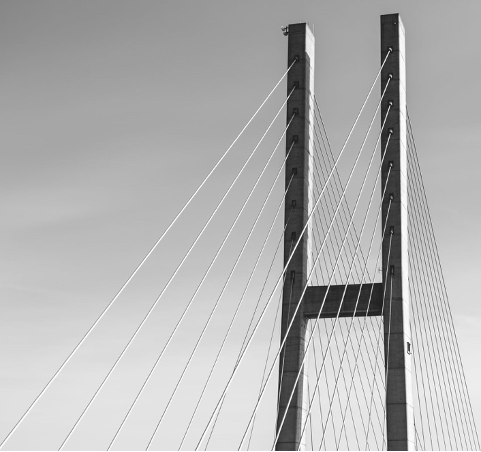 We keep saying we’re going to do something about our nation’s aging infrastructure. But we don’t.

Rarely has a need with such bipartisan support gone underfunded for so long, despite the diligent efforts of many organizations—from labor to business and even political and policy organizations on the right and left—to break the logjam.

To support an effort on what is one of the biggest economic challenges facing this country, we underwrote a study of the American electorate. Our goal was to find out what voters find relevant in the infrastructure discussion, along with ideas on how to move our infrastructure forward.

The following are five insights gleaned from talking to American voters. It is our hope that this can help fuel interest, enthusiasm, and support for the much-needed investment in our nation’s infrastructure.

Insight Number 1: Americans don’t appreciate the infrastructure problem. At the very least, we need to get through the thinking filter.

Let’s go back a few years. In 2016, people who voted for Donald Trump were much more sanguine about our nation’s infrastructure than Clinton voters. On every infrastructure element tested, Trump voters were more likely to rate these systems as either being “excel- lent” (A) or “good” (B) than those who voted for Clinton. 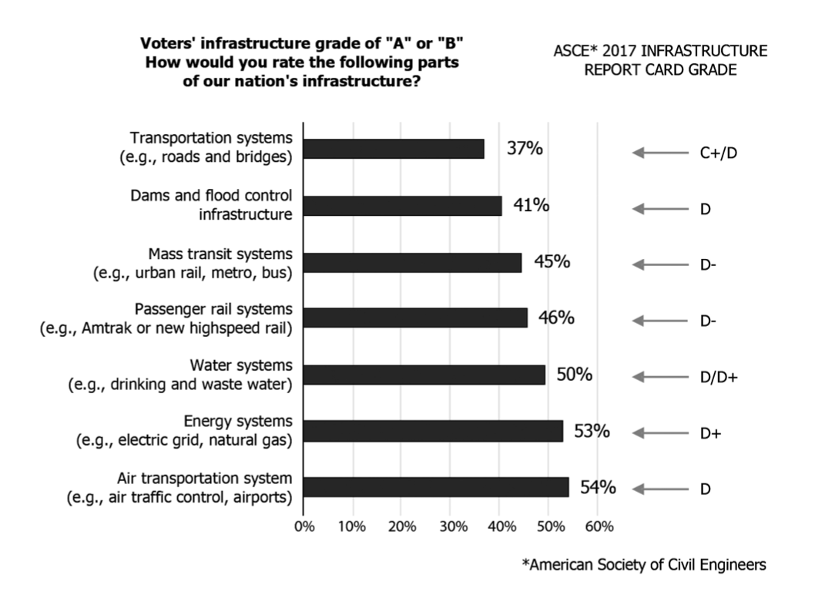 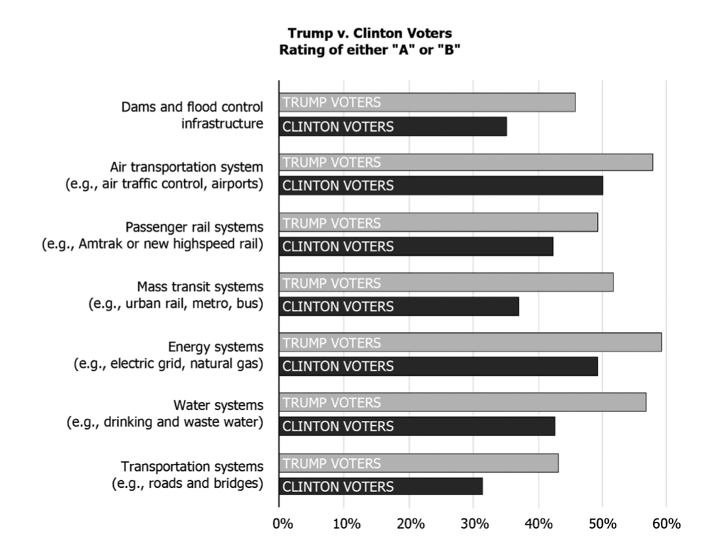 Infrastructure covers a lot of territory. By definition, it encompasses all the necessary systems and structures that make business and civic life possible. One of the early challenges for the government will be: where we should focus the investment given limited economic resources.

In our survey, voters provided a clear set of priorities: water, energy, and transportation.

The public’s priorities are largely bipartisan with two modest differences. 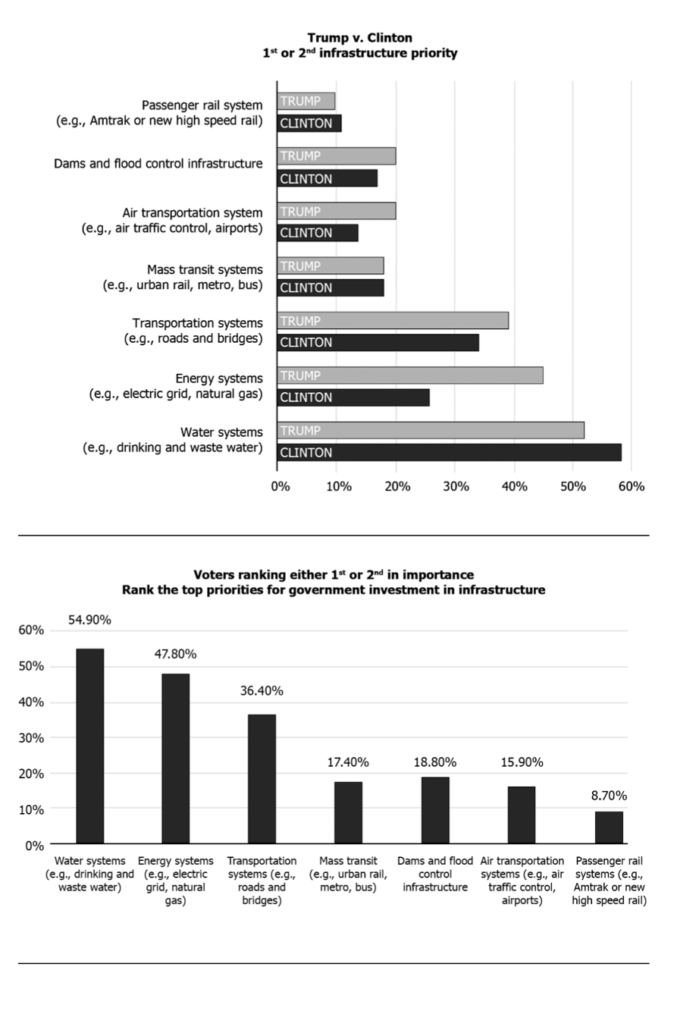 There are two important things to note.

The data doesn’t suggest things like passenger rail, flood control, air transportation, and mass transit systems are unimportant. Rather, it reveals that they were not top priorities of the people surveyed.

Also, as noted earlier, voters give our infrastructure much more positive grades than many experts do. Voters may have this wrong! But if they do, they are going to need more education and engagement to change their views.

Insight Number 3: Make the message as dramatic as the problem.

Let’s begin this section with a question: Are we correctly talking about the urgency of this critical issue?

The case for infrastructure typically focuses on productivity and jobs. Improved infrastructure means greater efficiencies, greater access to improved technologies and improved materials, and an overall more efficient and productive economy. By investing in infrastructure, we also create jobs—particularly the well-paying, blue-collar jobs America is in sore need of. This, in turn, can boost overall growth in the economy.

Both of these points are right. But there is a message that is missing: public health and safety, i.e., appealing to the values filter.

In our study, health, safety, and security were the top-ranking benefits compared to four other benefits, including jobs and economic competitiveness.

We’ve seen bridges collapse, water systems contaminated, and dams fail. But the health and safety benefits of infrastructure investment don’t appear to be as prominent in messaging as things like productivity and jobs.

An opportunity for advocates of infrastructure is to go beyond the economic benefits and show how investments today can improve health, prevent accidents, and save the lives of family, friends, and their communities in the future. 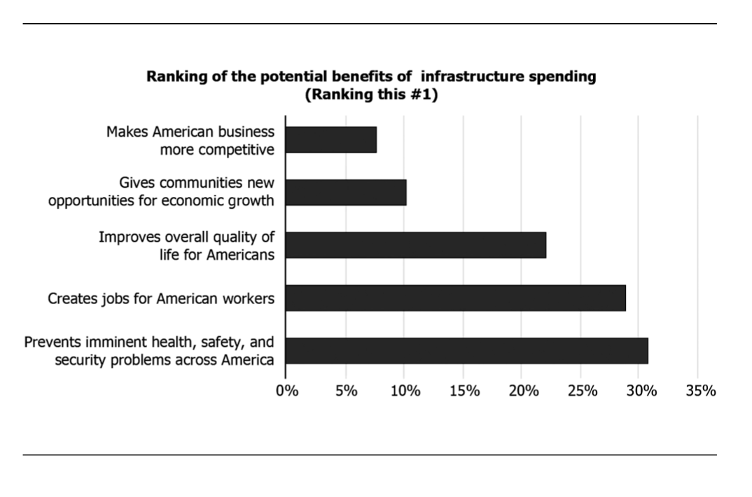 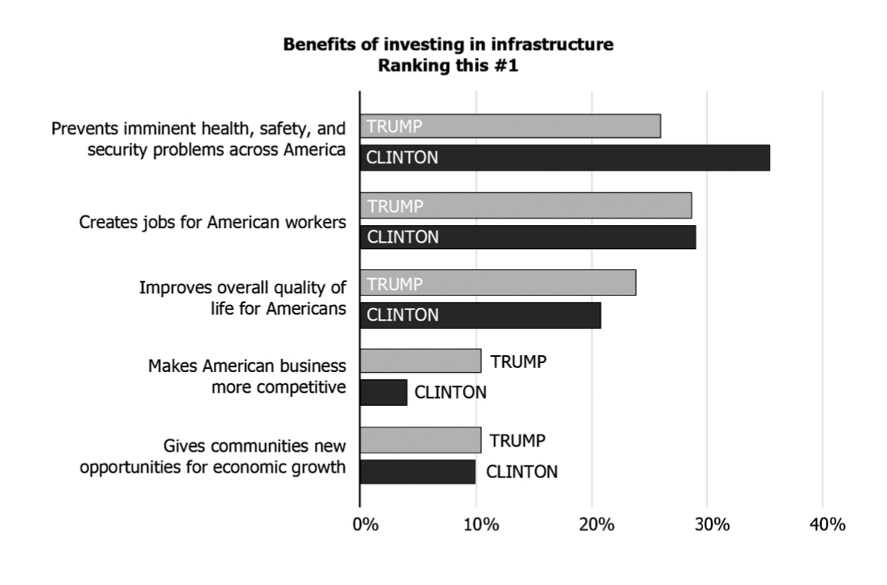 While the pattern of infrastructure investment benefits was largely held along political lines, there were modest differences between Trump and Clinton voters.

The BIG difference here was gender. Women were twice as likely as men to put health, safety, and security as their top benefit.

For men, jobs were the number one benefit, with security a distant second.

Insight Number 4: There are constituencies out there for every infrastructure component.

The good news is that for every piece of the infrastructure we tested, there are “natural” constituents who recognize the need and support funding for that area.

In other words, for each infrastructure element, there are natural and logical groups who can (and should!) form the basis of a grass- roots effort to keep infrastructure at the top of every elected official’s priority list.

Our study identified the top constituencies, or strongest supporters, for each element of our infrastructure.

Insight Number 5: Spread out the risk and the rewards.

Although many inside and outside of the government agree on the need for massive spending, finding the necessary money for that spending has been a challenge.

In our study, there were mixed signals on voters’ willingness to pay more taxes to improve infrastructure. The elements of infrastructure that Americans said they’d be willing to pay for aligned with their priorities. Over half said they’d pay more taxes to improve water systems (51%), followed by transportation (44%), then energy (43%). After that, there was a significant drop.

Our survey strongly suggests that there’s no broad base of support for funding infrastructure solely by raising taxes.

More than four-in-ten (42%) say that the infrastructure investment should come from budget cuts elsewhere. Slightly more than one-quarter (27%) say that infrastructure spend should be fully funded through tax increases. A little over thirty percent say it should be a combination of the two.

Our study suggests that: