These words can’t do justice to what we saw Monday and Tuesday, including glimpses of creation in its infancy – images of the universe as old as 13 billion years, or less than 1 billion years after the big bang. The faint red smudges (galaxies) were visible amid a dazzling array of stars, younger galaxies, gases, and cosmic dust captured by NASA’S James Webb Space Telescope, which has given us the deepest and sharpest infrared images of the distant universe so far.

President Biden unveiled the first image on Monday, about two decades after NASA began developing the behemoth device, which was launched into the heavens last Christmas. As Nobel prizewinner and senior project scientist John Mather put it, Webb will help answer “What happened after the big bang? How did the expanding universe cool down and make black holes and galaxies and stars and planets and people?” 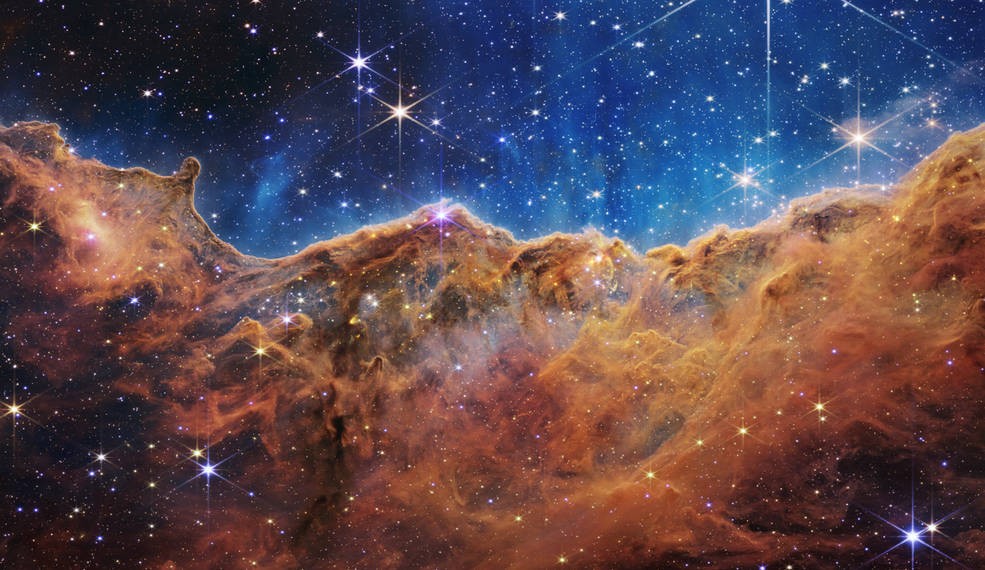 You’ve probably seen the images: a star-forming region dubbed “Cosmic Cliffs”; a galaxy cluster as it appeared 4.6 billion years ago; a quintet of galaxies; a planetary nebula with a dying star at the center; and the atmosphere of exoplanet. The painterly visions are literally awesome in their beauty, their meaning, and the new data they are said to contain. You can also appreciate them through the teary eyes and quavering voices of the proud scientists from NASA and its Canadian and European counterparts (livestream).

The infrared light Webb captures is invisible to the human eye, so “we’re basically translating light that we can’t see into light that we can see by applying color, like red, green, and blue to different filters that we have from Webb,” said Joe DePasquale, a senior science visuals developer. “The reason we want to color the images is that there’s actually more information that you can get if you see it in color.”

Although NASA did a great job explaining what we were looking at, it clearly would have helped to be steeped in astronomy, physics, and chemistry. If you’re not a STEM person, you missed out a bit on something you desperately wanted to immerse yourself in. Rarely has there been a better ad for staying in school, studying hard, and taking plenty of science.

We at Brodeur Space Group were having our own cascade of emotions, thinking of a parent who worked on the Apollo moon lander, of clients who are going to space to improve life on Earth, and of our younger selves staring at the night sky.

Why are we here? And how did we get here?

“Every dot of light you see here is an individual star not unlike our sun, and many of these likely also have planets,” said NASA astrophysicist Amber Straughn as she pondered the Cosmic Cliffs. “It just reminds me that our sun and our planets and ultimately us were formed out of the same kind of stuff we see here. We humans really are connected to the universe, we are made of the same stuff that’s in this beautiful landscape.”

This is just the beginning of what Webb can show us, we are told. Said NASA administrator Bill Nelson, “We don’t want to ever stop want to exploring the heavens or stop daring to take another step forward for humanity. In the words of the famous Carl Sagan, ‘Somewhere something incredible is waiting to be known.’ I think those words are becoming reality.”

As an agency representing multiple nonprofit clients, we are happy to celebrate #NationalNonprofitDay! We are proud to help foundations, such as the Jimmy Fund, make as much of an impact as possible. http://ow.ly/NBFF50Kl85o

With more companies adopting a remote/hybrid work model, #DigitalNomadDay recognizes those who take advantage of this new work environment to travel.

Mixing travel with work and clocking in from anywhere sounds amazing, but is it all it’s cracked up to be? Share your thoughts!

NASA’s James Webb Space Telescope has delivered the deepest and sharpest infrared image of the distant universe so far. Check out the Brodeur Space Group’s reflections on the moment: https://bit.ly/3IAxrUM #JamesWebb #UnfoldTheUniverse